Who Gets the Engagement Ring in a Florida Divorce? 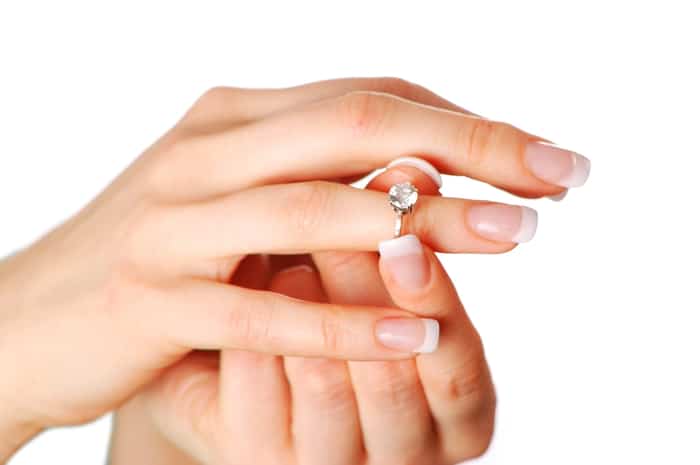 13 May Who Gets the Engagement Ring in a Florida Divorce?

When a marriage ends, the dividing up of assets is often the most stressful task. From college funds to property rights, determining the rightful owner of assets is one of the more challenging tasks attorneys, and judges must complete. While many of these objects can be more practically examined, a wedding ring presents are also a more sentimental asset. This situation is further complicated if the marriage was short-lived, as the often exorbitantly-priced jewelry may be one of the most valuable assets that the couple owns.

In a legal sense, a wedding ring is considered an object that was “gifted” before marriage. More often than not, the recipient of the wedding ring will be considered the property’s owner. However, there are many legal variations that define different kinds of “gifts,” which ends up making this decision a bit more difficult.

When looking at Florida, in particular, the courts are more than likely going to consider the wedding ring as a “conditional gift.” Many other states also lean toward classifying wedding and engagement rings under this law. A conditional gift is defined as “a gift of property which is revocable if the recipient does not fulfill conditions attached to the gift.” In the case of wedding rings, this condition is that the receiving spouse marries the spouse gifting them the ring. Because of this, if the marriage falls apart before the official ceremony, the ring will likely be returned to the donor.

The conditional gift of the wedding ring, on the other hand, can often be kept by the “donee” spouse it was received by if the marriage ended in an actual divorce, after an official and legally binding marriage ceremony. In this case, the ring is lawfully considered her personal, premarital property.

What Happens if the Marriage Never Happens?

Unfortunately, not every engagement is meant to be. The “conditional gift” status of a wedding ring becomes much more complicated when a breakup happens before the official legally binding marriage ceremony. Essentially, the court becomes charged with discovering who is responsible for the break-up of the engagement. This process can be a grueling one but is very necessary.

As mentioned before, if the donee spouse is the one who ends the engagement then the ring will more often than not return to the donor spouse. Without living up to their agreement of completing the marriage ceremony, the donee is not lawfully entitled to the ring as a piece of personal property. Additionally, if the breakup is mutual, then the donor will be the one that is more often than not given rights to the wedding ring.

Things begin becoming more complicated if the donor spouse is the one that prematurely ends the engagement. In this case, the donee spouse will be the one who gets to keep the wedding ring, as they did not willfully break the contract associated with the conditional gift. Since the donor spouse forcibly put the donee into this situation, the contract of the conditional gift is considered void, and the ring becomes the donee’s property.

Although a wedding ring will be lawfully considered a conditional gift in nearly every situation, there do exist some exceptions. If, for example, a ring was gifted during a particular holiday, it may be classified as an “unconditional gift.” Important dates such as birthdays, Valentine’s Day, and Christmas can cause the gift to be seen as being given in honor of an occasion.

Since the property was given in honor of an occasion, it can be argued legally that the promise to marry was never lawfully associated with the gifting of the wedding ring. In the eyes of Florida lawmakers, special occasion gifts do not fall under the “conditional gift” category and thus do not have to be returned to the donor.

Whenever this situation arises within divorce or early separation proceedings, it tends to cause a lot of arguments between parties. Ultimately, it will be up to the attorneys to prove that a wedding ring either was or was not a “special occasion gift” and not a “conditional gift.”

What Happens When One of the Spouses Die?

Death is perhaps the final complication that can arise when the ownership of a wedding ring is being argued. Florida laws and statutes have very little specific literature regarding what happens if either the donee or donor dies before or during a marriage. However, other states have had more consistent results, which can give one insight into what may occur in the situation of death.

If the death occurs before the wedding, the ring will almost certainly be returned to either the donor or the donor’s estate. The donor is not considered in breach of the “conditional contract” in the case of death, nor is the donee, as neither party voluntarily ended the engagement. However, if the marriage did take place and the donor dies, the marriage contract is still considered fulfilled, and the donee will get to keep the ring as part of her estate.